There’s a new business in the neighborhood! Northwestern Mutual is the first tenant to move into Fort Industry Square. This move welcomes 25 financial representatives and advisors, 25 support staff members and 30 local interns to downtown Toledo.

“Being the only Northwestern Mutual firm in the area, we felt it was only right to be part of the energy and rejuvenation that’s happening downtown,” said Managing Director Brad Patterson. “We’re excited to be part of the downtown community!” Fort Industry Square is a collection of historic buildings located on Summit Street between Monroe Street and Jefferson Avenue. Combined, they are 144,000 square feet which have been used for offices, retail space, restaurants and apartments while overlooking the Maumee River. The collection of buildings gets its name from a  military fort built in the early 1800s. The fort depiction shown on the City of Toledo’s seal displays a stockade complex built around 1800. It was used on July 4, 1805, for the signing of the Treaty of Fort Industry which opened the Firelands area for settlement. Fort Industry Square is being redeveloped by Karp and Associates and will include additional office and retail space, as well as 90 new residential units. Detroit-based restaurant Bobcat Bonnie’s will open later this winter in the space that was formerly Murphy’s Place, a jazz club. 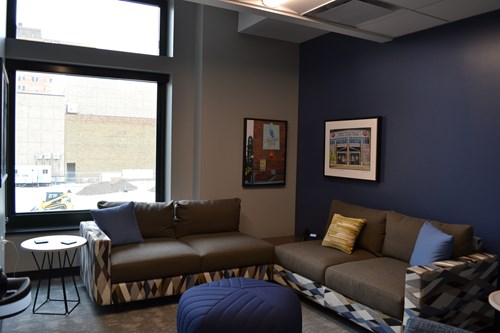 Northwestern Mutual has provided financial security support to people and businesses for 160 years. The newly designed space includes several areas and collaboration rooms with the latest technology to help facilitate advisor development and client engagement. The new office represents the firm’s commitment to the community, its clients, and its advisors in their mission to deliver financial security to the greater Toledo area.

ConnecToledo is a 501(c)3 organization committed to the redevelopment of Downtown Toledo. Funded by the city's leading institutional and corporate organizations, ConnecToledo is committed to facilitating public/private partnerships, promoting events and attractions, investing in planning and projects and advocating for businesses. We build the critical connections for developing vibrant neighborhoods and a strong central business district.