ConnecToledo is working with a State of Ohio tool, known as Community Entertainment Districts or CEDs, to increase the number of allowable liquor licenses. CEDs encourage entertainment activity in a concentrated area by creating jobs and supporting revitalization. Currently, downtown Toledo has four existing CEDs. As the boundaries of “downtown” has grown, the need for additional CEDs has surfaced.

Working with the current and future entertainment businesses along North Summit Street from Cherry to Bush, ConnecToledo helped write the request to the mayor asking for the new CED. The mayor was supportive and asked Toledo City Council for approval. A public hearing was held with Council with them approving the Lowertown CED on July 20, 2021. The next step is for the State of Ohio’s Liquor Control Division to review and approve the application.

Toledo City Council’s role of approving individual applications has not changed. Any restaurant, retail, or entertainment establishment may apply for a CED license, known as a D5J through the State of Ohio. Once the state requirements are met, the final approval is through Council.

The Lowertown area is booming. Toledo Spirits, 1301 N Summit, founded in 2013. They are a craft distillery that makes premium spirits, operate a cocktail bar known as Bellwether, and recently began brewing and selling craft beers known as the HEAVY Beer Company. Realto Jeans Project, 927 N Summit, creates eco-friendly, philanthropic denim sold globally. The Lofts at Wonder Bread, 1119 N Summit, will soon have 33 modern, loft apartments. Opening in the Fall is TolHouse, a combination of a private members club and public jazz club at 1447 N Summit. By end of August, the Gateway at Lowertown, 915 N Summit, will announce their first tenant as the owner seeks to transform this space into a variety of entertainment options.

If you want to know more about Community Entertainment Districts, please contact our vice president, Cindy Kerr, at 1-419-249-5494. 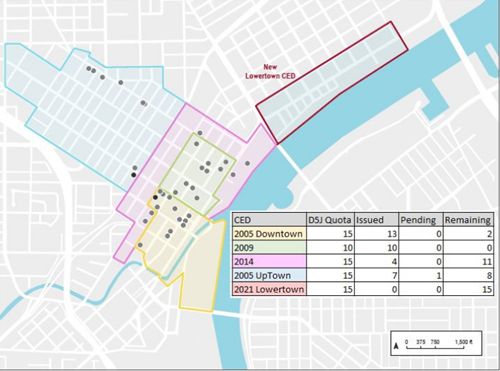